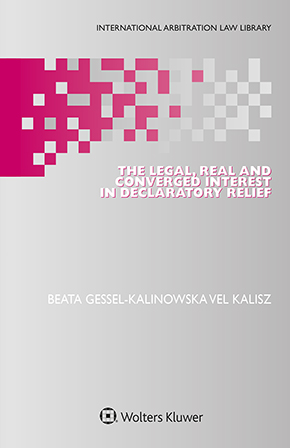 The Legal, Real and Converged Interest in Declaratory Relief

The Legal, Real and Converged Interest in Declaratory Relief is a combination of practical experience and dogmatic analysis that focuses on declaratory relief relating to disputes resolved within the framework of international commercial arbitration and litigation. It is construed as a remedy where the plaintiff seeks an authoritative judicial statement of the legal relationship. Although of enormous significance in dispute resolution, declaratory relief has not been analysed in detail until this deeply informed study.

What’s in this book:
Focusing on the notion of ‘legal interest’ as a prerequisite to declaratory relief  – which the author views as a serious limitation of access to justice – this book sets out to redefine the term in order to respond to the needs of modern legal dealing. Issues and topics such as the following are thoroughly considered across the chapters:

How this will help you:
Given that recent legal scholarship has been increasingly insistent that judicial practice should evolve towards broader use of declarations, particularly where interpretation of contractual stipulations is necessary, this book elaborates a new perspective for modern redefinition of the legal interest concept. With its challenging redefinition of this concept, it promises to play an important role in formulation of relief in dispute resolution, particularly in international commercial arbitration. Lawyers and arbitrators will benefit from the awareness of how other tribunals decide and how awards can be formulated, and arbitration institutions as well as academics in the field will welcome this deeply informative analysis.

CHAPTER 3
The Concept of ‘Real’ Interest in English Law

CHAPTER 4
The Concept of ‘Converged’ Interest in International Arbitration Awards

ANNEXES
Reports on Main Features of Declarations in Germanic Jurisdictions

Table of Legislation and Statutes