Loading...
Store International The Legal Protection of the Pregnant Worker in the European Community 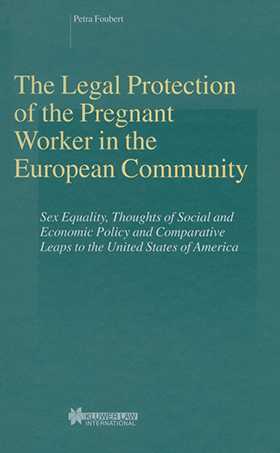 The Legal Protection of the Pregnant Worker in the European Community

Qty.
This product is available for the standing order program. Learn More
Add to Cart
* For general delivery times, please see our Shipping Policy
Share
Overview
At the intersection of the private sphere of the household and the public sphere of the labour market and paid work lie four essential human realities: pregnancy, childbirth, breastfeeding, and childrearing. Do these factors make women unattractive as workers and cause them to be discriminated against in the labour marketplace?

This provocative study sets out to answer this question through an in-depth analysis of theory and actuality in the European Union, providing detailed analysis of EC legal measures and ECJ case law. The author's very convincing conclusions are bolstered by a revealing comparison with similar legislation and jurisprudence in the United States.

The focus of the study is on the relatively narrow area of sex discrimination, i.e., discrimination because of the biological factors of pregnancy, childbirth, and breastfeeding. The author demonstrates that an understanding of this specific and measurable kind of discrimination is the first step toward discrediting the wider category of gender discrimination, which penalizes women as full-time caregivers who cannot be relied upon as workers in the marketplace. She examines numerous instances of unequal treatment on biological grounds, and in the process appraises the legal limits of accommodation of the biological differences between men and women.

Drawing on a wealth of interdisciplinary sources, the primarily legal dimension of this study is securely underpinned by reference to scholarship in the historical, social and economic rationales for discriminatory attitudes toward pregnancy, childbirth, and breastfeeding.