Loading...
Store International The Legal and Institutional Framing of Collective Bargaining in CEE Countries: Between Europeanisation and Decentralisation 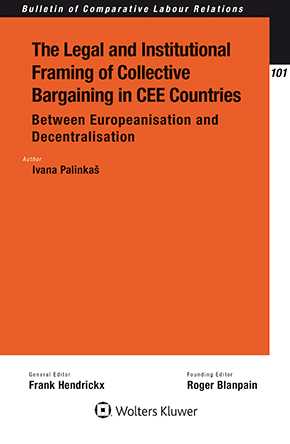 The Legal and Institutional Framing of Collective Bargaining in CEE Countries: Between Europeanisation and Decentralisation

The Legal and Institutional Framing of Collective Bargaining in CEE Countries scrutinises the legal and institutional framework for collective bargaining in Central and Eastern Europe (CEE), including its development in the past two decades. The formerly communist countries of CEE have witnessed a profound transformation of their labour laws since the 1990s and, especially, after their accession to the European Union. Today, in comparison to the other Member States, they continue to have weak trade unions and employers’ associations and an underdeveloped system of collective bargaining. Moreover, the recent economic and financial crisis highlighted the need to invest further efforts in bringing the CEE industrial relations closer to the ‘old’ Member States in order to facilitate more meaningful enforcement of the EU-wide economic and social policies. This is the first book to discuss this important matter in depth.

Focusing on four current CEE labour law regimes – in Slovenia, Slovakia, the Czech Republic, and Poland – that also have different collective bargaining trends and can be said to exemplify some of the main legal and institutional frameworks for collective bargaining that the CEE countries have developed, the author addresses the following major issues:

The analysis always keeps in focus the development of labour laws in relation to a number of such interlinked elements as market transformation, type of privatisation of state ownership, and attitudes towards welfare. It draws on both the relevant literature and on twenty-five interviews with legal and policy experts from social partners’ organisations and staff within the ministries for social affairs in the selected countries.

In support of the study’s general finding that the laws in CEE countries could provide more stimulus for sectoral and cross-sectoral collective bargaining, the author offers deeply informed recommendations and insights into legal shortcomings and pinpoints how the existing legal frameworks can be enhanced. Any professional or academic in the field of industrial relations, and particularly those concerned with complex transitions such as those occurring in the CEE countries and elsewhere in the world, will find this book of great value.

CHAPTER 1
Introduction: Framing the Study on the Legal and Institutional Framework of Decentralised Collective Bargaining in CEE

PART I
General Reflections on the Legal and Institutional Framework

CHAPTER 4
From Accession to the Economic and Financial Crisis: What Role for the EU?