Loading...
Store International The Law of Subsidies under the GATT/WTO System 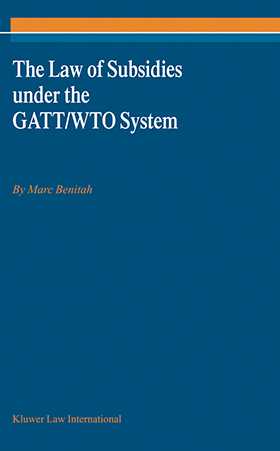 The Law of Subsidies under the GATT/WTO System

Qty.
Add to Cart
* For general delivery times, please see our Shipping Policy
Share
Overview
This work on the law of subsidies has been long-awaited by many actors in international trade. With its introduction of the concept of 'attenuation' of entitlement, Marc Benitah's utterly new analysis alters our understanding of the international economic law of subsidies - and its future invocation and jurisprudence - forever.

The issue of subsidies is arguably the predominant theme, at this moment, in international economic law, and a consistent approach to the legal treatment of subsidies is urgently needed. In Professor Benitah's view, the answer lies in the recognition that entitlements granted to a party seeking to defend itself against the `adverse effects' of subsidies must be `attenuated' in order to avoid undesirable economic and social consequences.

In the various techniques of attenuation - thoroughly described and analyzed in this book - may be found the unifying thread on which a logical, coherent law of subsidies may be strung.

Part II: Techniques of Attenuation as a Seed for the Birth of Legal Disputes
A. Legal Disputes Arising from the Ambiguous Link Between Two Texts
B. Disputes Arising from Poorly Defined Concepts
C. The Failure of Extremist Techniques of Interpretation
C(a). The failure of Country B's sophisticated economic interpretations
C(b). The Failure of Attempts to Intensify Country B's Attenuations through an Extremist Technique of Interpretation
D. Vulnerability of Attenuations Favoring Developing Countries
E. The Problematic Coherent Application of Attenuations Derived from the Concept of `Distortion'
F. Causality Between Subsidy and Injury for the Purpose of Countervailing Duties: A Legally Indeterminate Attenuation

Part III: Obstacles in the Way of Clarifying Attenuated Norms Through the Case Law Process