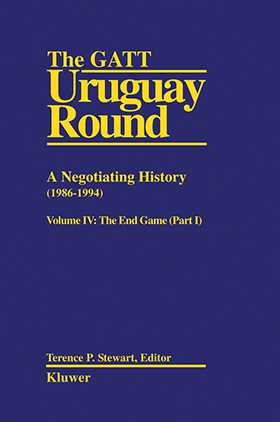 Qty.
Add to Cart
For general delivery times, please see our Shipping Policy
Share
Overview
Volume Four of The GATT Uruguay Round: A Negotiating History (1986-1994) deals with the final sessions of the world's most ambitious trade negotiations to date and its most significant accomplishment--the creation of the World Trade Organization. It includes the negotiating history of important modifications made during the end-game in 1993 and before the signing ceremony in Marrakesh in April 1994.

This period saw major changes in the text and the extent of obligations undertaken in the agriculture and services sectors, as well as the final completion of negotiations in subsidies and countervailing duties, customs valuation, and other sectors. It was also during this last period that the final agreements in trade-related aspects of intellectual property rights (TRIPS) and trade-related invested measures (TRIMS) emerged.

Like the earlier volumes in this treatise, Volume Four is useful for its revelation not only of what was resolved but also of what was not resolved. This work belongs in the collection of all concerned with the evolution and continuing development of international trade as a vital component of our contemporary world.