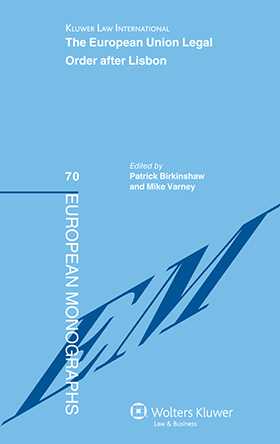 After a variety of stumbling blocks and false starts, the Treaty of Lisbon is now in force, despite the widespread instability let loose in the last two years as protectionism reared its terrified head in many EU Member States and nationalisation and massive state support for the national banking sector became panaceas for the global financial drama. Nonetheless, forces are still at large that seem to threaten the basic freedoms of the Union and to undermine the future of the common market. Given these circumstances, in June 2009 the Institute of European Public Law of the University of Hull assembled a range of experts in relevant fields to offer papers and reach some consensus on what has been achieved in the EU legal order and what the future holds for that order given local tensions and global uncertainty. This remarkable volume reprints those papers.

Sixteen well-known scholars in European law and politics present insightful (and sometimes provocative) studies in such areas as the following:

• the future of European Public Law and its limits;

• the future of the European order;

• the EU and global administrative law;

• European law between constitutionalism and governance;

• reforms in financial and banking regulation;

• accountability in a separation of powers context;

• the role of European judges;

• constitutional pluralism in the EU.

An authoritative appraisal of challenges facing the process of ‘Europeanization’ at a time of considerable uncertainty for the European Union and its legal order, this volume examines the present state of development of different areas of European law and reflects on the future for these areas in the light of the impasse on constitutional and legal reform and their eventual resolution. As such it will prove to be highly relevant to current and future debates in this area and should be of considerable interest to scholars in European law, politics and allied fields.