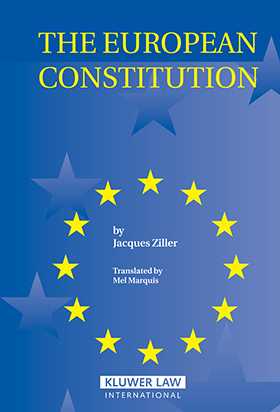 Qty.
Add to Cart
For general delivery times, please see our Shipping Policy
Share
Overview
Although, until very recently, the word constitution was noticeably absent from the EU's political vocabulary, this formerly taboo word has surfaced in dramatic fashion. In order to bridge the gap between the institutions of the EU and its citizens, the European Convention of 2002-2003 developed a single, integrated constitutional text, which has now been adopted by the heads of all EU Member States and is winding its way through the politically treacherous path of ratification.

This remarkable book offers a first in-depth analysis of the Treaty establishing a Constitution for Europe. As the author constitutional law expert Jacques Ziller notes, the new Constitution is in many ways a grand integration of elements from existing European law (most importantly from the case law of the European Court of Justice), yet at the same time the new text features groundbreaking innovations with far-reaching implications for the future of Europe.

As one of the book's most extraordinary features, the commentary is regularly accompanied by tables illustrating essential terms and concepts pertinent to the discussion. A first publication of the book in France and Italy just after the end of the Convention's work proved such a success that a second edition was requested as soon as the final text of the Treaty was approved. The fate of the Constitution will be determined by the vagaries of the ratification process. Yet whatever the outcome, Professor Ziller has rendered an indispensable service, as the principles and arguments crystallised in this moment of Europe's political history will continue to exercise a profound effect on its future development. And while the breadth and precision of the knowledge embodied in this work is prodigious, the presentation is clear, simple, and captivating. It is sure to be useful to anyone interested in the new European Constitution the uninitiated and the seasoned veteran alike.

Jacques Ziller is a Professor of Law at the European University Institute in Florence, Italy, on leave from the University Paris I Panthéon-Sorbonne. He has authored numerous books and articles concerning various aspects of European Union law, as well as many other legal topics, and has taught at several major universities and training institutions in France, Belgium, Spain and The Netherlands. He is fluent in French, English, German, Dutch, Italian and Spanish. During the European Conventions work, Professor Ziller served as Counsel to the EU Committee of the Regions and thus brings an insider's perspective to the evaluation of its work.

Preface; G. Amato. Note regarding citations. I. Why have a Constitution? 1. What has changed? A Constitution in the tradition of the Enlightenment. 2. What hasn't changed? A Constitution without a State. 3. Imparfaite, mais inespérée. II. The European Constitution: What is it, exactly? 1. A Treaty laying the foundations of a Constitution. 2. One text instead of two. 3. Four Parts distinguished according to their content, origins and elaboration. 4. One text; at least twenty-one languages. III. The European Convention: A Constitution is born. 1. From a body to a diverging visions and interests. 2. The Laeken mandate: The Convention on the future of Europe. 3. A melting pot of diverging visions and interests. 4. The members of the Convention. 5. Neither a parliament nor a conference of diplomats. 6. The IGC: A few steps forward, a few steps to the rear. IV. What everybody thinks they know 1. but what only the future can say. 2. what may be surmised 3. Less simple than it seems. V. The road ahead. 1. Enlargement: Is the Constitution suitable for a Europe of 25 Member States? 2. Ratification and entry into force. Related reading.