Loading...
Store International The Eclipse of the Legality Principle in the European Union 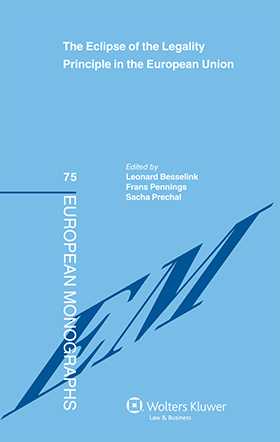 The Eclipse of the Legality Principle in the European Union

Legality is a traditional normative concept to regulate the relationship between those in power and those subjected to that power. The principle of legality protects the citizen against the arbitrary use of power, or, more precisely, it demands a legal basis (which itself must be of a certain standard) to legitimize State action. Is legality under siege in Europe? The authors contributing to this provocative and important book answer this question in the affirmative.

Twenty-one outstanding European legal scholars expose a spectrum of ways in which the traditional legality principle is under pressure because of the creation of new legal orders, including that of the EU, and the interaction between these new orders and that of the State, combined with such factors as expertise driven governance, difficulties of international organizations to meet their objectives due to a lack of adequate powers, and lack of parliamentary control.

The question of whether the main functions of legality – legitimating, attributing and regulating the exercise of public authority – are still fulfilled in the context of the overlapping, interacting, and mutually dependent legal orders of the EU, the ECHR, and the Member States is at the background of all the essays in this volume. Recognizing that legality, if it is to survive, demands rigorous reconsideration of its scope and application, the authors interrogate not only such fundamental democratic issues as who has legitimate power to perform legislative acts and through these to exercise of public power over citizens, but also such urgent European problems as the following: ;

There can be little doubt that the issue of legality and to whom it applies – in a world in which the role of the modern State is changing profoundly – is a crucial one. It is highly important in the context of the ongoing discussion on the meaning of democracy and citizenship. This volume, with its clear message that reconsidering legality demands taking serious issue with the uncertainty engendered by the processes of globalization, will resonate profoundly among practitioners and policymakers in this time of momentous change.