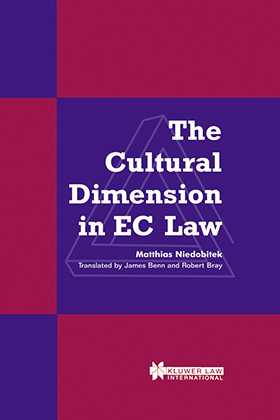 The Cultural Dimension in EC Law

Qty.
Add to Cart
* For general delivery times, please see our Shipping Policy
Share
Overview
This work analyzes the options and powers which exist at Community level for taking action in the sphere of `culture'--which is defined as education, science and culture in its narrower sense--and covers the question of the EC's cultural jurisdiction.

The definition of culture underlying this work has two functions: firstly, from the point of view of form, it narrows down the subject matter under investigation and, secondly, it characterizes that subject matter, substantively, as the area covered by 'those manifestations of life in society which cannot be measured by the yardstick of economic efficiency'--a characterization which links together the three areas making up the field of culture: education, science and culture in the narrower sense.

Individual aspects of the EC's cultural jurisdiction (particularly the question of the EC's powers in the field of broadcasting) have previously been covered in varying degrees of detail in the literature, prompted by decisions of the Court of Justice or the adoption of legislation by the Community institutions.

General investigations encompassing the various individual problems and the principles of the relationship between culture and EC law are always readily available, but often lack the necessary depth because of their approach. This study attempts to fill the gap which has been found to exist in the literature on European Community law. It is an English version of the author's doctoral thesis, which was awarded the Wolters Kluwer Award of 1993.

In order to consider the changes brought about by the Maastricht Treaty, the author has added a section on the Treaty on European Union, which originally appeared as 'Die kulturelle Dimension im Vertrag über die Europäische Union' in the journal Europarecht (EUR 1995, 349-376).