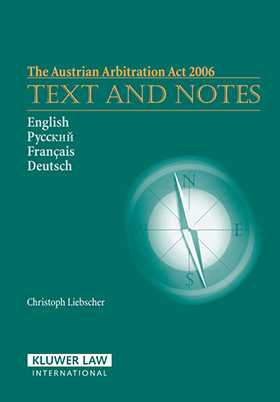 Qty.
Add to Cart
For general delivery times, please see our Shipping Policy
Share
Overview
With the Arbitration Act of 2006 Austria consolidates its emerging role as a seat for arbitration proceedings affecting Central and Eastern Europe. Based to a significant extent on the UNCITRAL Model Law, which is fast becoming an international stan-dard, Austria's new law is applicable in any proceedings involving parties from any country.

Assembled with detailed commentary in footnotes by Christoph Liebscher, a leading Austrian arbitration specialist and a member of the committee that drafted the law, this definitive presentation of the Austrian Arbitration Act of 2006 provides all of the fol-lowing:

This book will be of great practical value to arbitration practitioners, to international business people and their counsel, as well as to academics in arbitration and interna-tional trade law, especially in the context of Central and Eastern Europe.