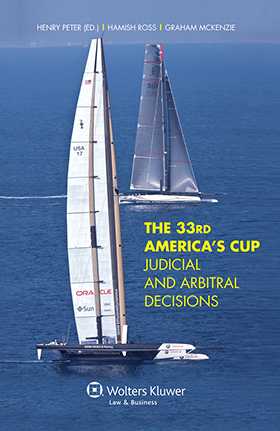 The America’s Cup is the oldest trophy in international sport. There have been thirty-three matches for its possession since 1851, and no challenger was successful until 1983. By 2007 the Cup had only changed hands four times. Disputes around the thirty-third match generated judicial and arbitral decisions that will be influential in all areas of international sporting law. This book – continuing the tradition of Kluwer Law International’s earlier publications on the 31st and 32nd America’s Cup – offers expert commentary (along with the decision texts themselves) on the judgments of various Courts and other dispute resolution bodies delivered during the tumultuous 33rd America’s Cup. Since there is no official complete record of many of these documents, this book is the only source that presents them together, in sequence, in a single volume, with the added benefit of commentary. The structure of this book proceeds as follows:

A concluding chapter provides information and documents pertaining to the America's Cup trademarks and other intellectual property issues and to the management of the America's Cup, with suggestions as to amendments that could be considered to the current Deed of Gift. These latter comments are made with a view to limit the possibilities of new controversies and, if any arise, that these are dealt with by arbitration and not, by disruptive, lengthy, costly, and uncertain state court proceedings. In this way the book provides invaluable guidance for trustees, competitors, and event officials, not only for the America’s Cup but by extension to other major international sporting events.

Chapter 7. Management and Future of the America’s Cup.

"Readers that are interested in sport arbitration will find this book fascinating. It is also excellent guidance for dispute resolution at other major international sporting events."