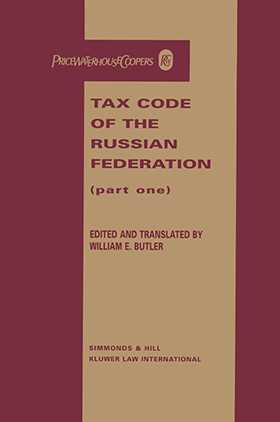 Tax Code of the Russian Federation, Part One

Qty.
Add to Cart
* For general delivery times, please see our Shipping Policy
Share
Overview
Adoption and implementation of Part One of the Russian Tax Code constitutes a significant step forward in the direction of reforming Russian tax legislation in the interests of a transition to a market economy. It is considered as the 'General Part' of the Tax Code, with the 'Special Part' yet to come. This expert translation by W.E. Butler contains amendments to the Tax Code current to 1 September 1999.

In comparison with the chaotic body of legislation which this part of the Tax Code replaces, it is far more conceptual in character, subjecting the Russian Law of Taxation for the first time to the general principles and practices of the codification evident in the other principal branches of Russian law. The terminology of the Tax Code is also brought closer to the mainstream of Russian legal concepts. A glossary prepared on the basis of the Tax Code appears at the end of the volume.