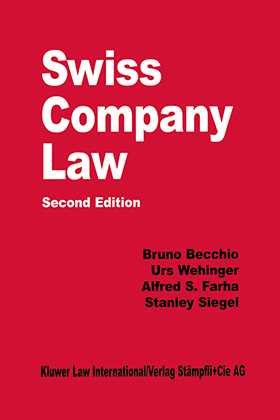 Qty.
Add to Cart
For general delivery times, please see our Shipping Policy
Share
Overview
This second edition follows the success of its predecessor, which was well received and respected by practitioners, academics and business people of Swiss and non-Swiss origin. It covers the changes in the company law provisions of the Swiss Code of Obligations originally adopted in 1881.

The authors have reviewed and updated the entire book, including the relevant general provisions of the civil code and incorporating the 1985 revisions to the law regarding Stiftungen (foundations). A departure from the first edition is the overall emphasis on American (U.S.) legal terminology, although in a few instances reference to English (U.K.) parlance is maintained for comparative purposes.

The revision of the Aktienrecht (Share Law), which represents the portions of the Code relating to the most common Swiss corporate organizational form, the Aktiengesellschaft (commonly abbreviated as AG or SA), became effective in 1992. It is primarily this event that prompted the revision of this book. The relevant sections of the Code (Arts. 620 to 763) have been fully re-translated, incorporating the revisions, together with selected relevant new provisions from other related laws.

The revised translation of the statutory provisions is accompanied by an in-depth translation addressing current issues, including, besides the substance of the revision of the code, comparative aspects of both the laws of the European Union and the United States, including accounting rules. Also revised are the charts and tables, including the `synoptic tables' which have proved to be of particular value to practitioners.