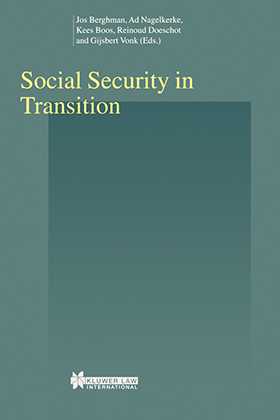 Qty.
This product is available for the standing order program. Learn More
Add to Cart
* For general delivery times, please see our Shipping Policy
Share
Overview
There was a time when it was clear what risks social security policy was meant to protect: unemployment, sickness, and occupational disability. For many decades, although true equity remained elusive, a focus on these 'external' risks seemed to be enough. It is to the credit of more recent policy that such previously 'hidden' but all-important matters as excluded minorities, inadequate income, and obstacles to personal development are now on the agenda. Yet, with the globalization of the economy, new and unprecedented risks proliferate, most of them being of the 'manufactured' kind that stem from technological and economic factors that are largely independent of time and place and that do not lend themselves easily to regulation.

Social Security in Transition surveys and analyses the forces affecting social security policy today as understood by twenty-one, mainly European, authorities in the field. Although each author focuses on specific issues (such as poverty, migration, retirement schemes, access to health care), a consensus emerges that social security can no longer be viewed as a distinct theoretical entity, but that it must be considered in a broad context of social policy that encompasses employment, education, and health care. That the state will remain the last resort for the resolution of dangerous social disparities seems inevitable; yet some transnational standards of fairness (including concerted action for the prevention of and combating the worst evils, such as poverty and social exclusion of migrants) are crucial if we are to develop meaningful state and collective arrangements that will not only support all individuals as they take responsibilities in life, enhance their opportunities, and make meaningful choices , but also safeguard the necessary level of social cohesion in society.

Social Security in Transition builds on papers that were originally presented at a June 2001 symposium in The Hague to mark the centenary of the Dutch Occupational Accidents Act 1901 and at the same time of Dutch social security. The symposium was an initiative of the Social Security 2001 Foundation, which was set up by a group of Dutch ministries, administrations and supervisory agencies, and social partners.

By enrolling a product in our Standing Order Program, you will automatically receive new editions of and other updates to the product as they become available on a risk-free, 30 day trial basis. Updates are invoiced at the then-current price, along with applicable sales tax and *shipping & handling charges. You have the right to return any update within 30 days of receipt. If you decide to keep the update after the 30 day review period ends, you are responsible for paying the invoice in full. The frequency of Standing Order shipments vary by title based on regulatory developments and publishing schedule. You are never obligated to purchase a minimum number of updates in order to take advantage of our Standing Order program. If you decide, for any reason, that you are no longer interested in the Standing Order program, or you did not intend to enroll, you may cancel any time by calling Customer Service at 800-234-1660 or emailing [email protected].com.