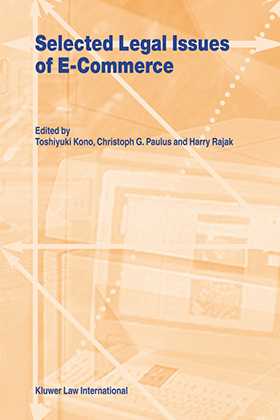 Qty.
This product is available for the standing order program. Learn More
Add to Cart
* For general delivery times, please see our Shipping Policy
Share
Overview
At a time when there are still a number of voices calling for the Internet to remain a law-free zone, a whole bundle of conflicts have already emerged, many of which have found their way to lawyers and the courts in a substantial number of different jurisdictions.

It surely now cannot be doubted that the Internet, like any other place in the world where people come together and follow their own interests, needs rules to be developed for the handling of such conflicts. Lawyers have already reacted and have created a new area of law--commonly called "law of the internet" or "cyberlaw".

This area, however, is still far from being strictly defined. It touches on many existing areas of law, but at the same time it deals with a wholly new medium--cyberspace--which itself is subject to constant change and development. Under these circumstances, it is not surprising that in a number of cases the predictions as to how this law will look at some selected moment in the future are vague and uncertain.

This is particularly true for the commercial side of the Internet, for which the term "E-Commerce" has been coined. So rapid have been the developments of E-Commerce, that it is now frequently said that this is the future of any commerce and that it carries the potential for enormous growth--at least for the business to business ("B2B") sector.