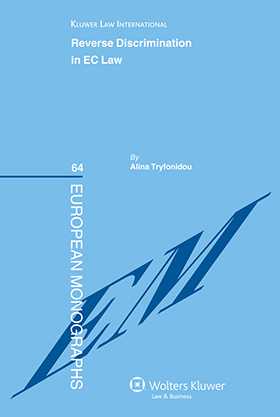 The spectre of reverse discrimination arises when it can be shown that a group is treated more favourably than another group that is normally favoured, as a consequence of positive action measures. Until recently, EC jurisprudence has consistently rejected allegations that reverse discrimination emerging in the context of the Community’s internal market policy is an EC problem, reinforcing its commitment to ‘positive action’ as a facilitator of cross-border economic activities. However, with the advent of EU citizenship (in terms of persons) and the formal completion of the internal market (in terms of trade), it is now possible to meaningfully ask: Is reverse discrimination still a permissible form of differential treatment in the Community? Or should it now be considered, first, an unjustified difference in treatment between Union citizens (and thus a violation of the general principle of equality), and, second, an unacceptable distortion of the conditions of competition in a properly-functioning market?

This important new book opens with an in-depth analysis of the ‘linking factor’ test that has implicitly been developed by the European Courts for determining whether a situation is purely internal to a Member State or whether it qualifies for EC protection. There is a detailed explanation of how the Court has traditionally applied this test in its case-law (e.g. in family reunification and educational qualification cases), and of the problems emerging from the application of this test. A presentation of the Court’s formal stance on reverse discrimination is also provided. With detailed reference to the case-law of the European Community Courts (including selected jurisprudence of national courts), the author shows how recent developments in internal market law have already affected the Court’s traditional stance towards purely internal situations and reverse discrimination, and that these developments can now be used in support of the argument that reverse discrimination is an incongruity in the contemporary EC.

Then, the author provides an in-depth analysis of two of the post-Maastricht developments in the context of free movement: the establishment of the status of Union citizenship by the Treaty of Maastricht in 1993 and the development of that status through the Court's recent jurisprudence; and the formal completion of the internal market in 1993, as required by the provisions inserted into the EC Treaty by the Single European Act. Focusing on the central issue of whether reverse discrimination is – and should remain – outside the scope of EC law, the author explains what has been the impact of each of these developments on the question of the permissibility of reverse discrimination in EC law.

A brief discussion of the available solutions to the problem and their advantages and disadvantages concludes the presentation.

This is a ground-breaking study in an area of European law that has received scant academic attention so far and is just beginning to be explored. In it, scholars, policymakers and practitioners will discover a firm foundation from which to pursue and ultimately define the limits of reverse discrimination in EC law.