Loading...
Store International Remission and Repayment of Customs Duties in the EU 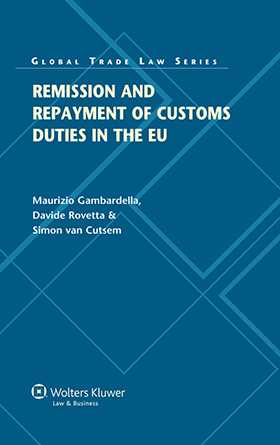 Remission and Repayment of Customs Duties in the EU

Remission and Repayment of Customs Duties in the EU will provide you with an authoritative analysis of this complex area of law. Written by three leading practitioners who clearly describe; what procedures to follow, what legislation to rely upon, and how to effectively invoke the case law on remission and repayment created by the Court of Justice of the European Union.

This new title will help you to become familiar with EU customs laws and to have detailed knowledge of the variety of situations, with regard to remission and repayment, which are not covered in the legislation, but in the jurisprudence of the Court of Justice of the European Union.

You’ll find detailed explanation of the administrative procedure before the customs authorities and the European Commission, and analysis of the possible judicial phase before national courts and the Court of Justice. The authors provide an overview of how the consolidated body of EU customs legislation and case law is interpreted in different EU countries, with in-depth focus on the particular remission and repayment procedures – from initial request to appeal – in three different jurisdictions.

Benefit from expert guidance on the following elements and more:

Remission and Repayment of Customs Duties in the EU will be appreciated by lawyers, advisors, agents, compliance managers of export-import companies, officials of EU Member States and of international organizations dealing with customs issues, and traders and authorities of third countries that export goods to EU Member States. All will find here a constant resource that can be relied upon to answer virtually any pertinent question likely to arise.

Chapter 1. Introduction to the General Principles.

Chapter 3. Repayment and Remission Pursuant to Article 220 of the CCC.

Chapter 4. Repayment and Remission Pursuant to Article 239 of the CCC.

Chapter 5. Other cases of Repayment and Remission.

Chapter 6. The Procedure to Lodge a Repayment or Remission Application.

Chapter 7. The Repayment and Remission Procedure before the European Commission.

Chapter 8. The Appeals against the European Commission’s REM-REC Decisions.

Chapter 9. Appeals at a National Level.

Chapter 10. The Procedure for Submitting an Application for Repayment or Remission before the Customs Authority in the Netherlands.

Chapter 11. The Procedure for Submitting an Application for Repayment or Remission before the Customs Authority in Belgium.