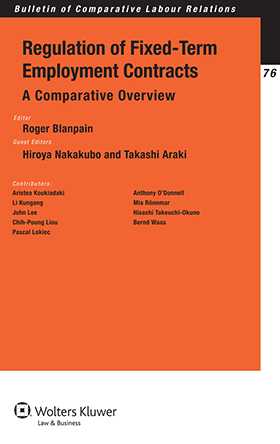 In recent decades enterprises worldwide have reaped the advantages of hiring employees on a contractual fixed-term basis, thus derogating from their traditional participation in the social protection of workers and insulating themselves from legal liability for unjust dismissal. A broad spectrum of effectiveness has emerged in this development, as different countries have adopted varying measures to regulate the conditions under which fixed-term employment contracts are written, applied, and interpreted. This important book – which reprints papers submitted to the 10th Comparative Labour Law Seminar of the Japan Institute for Labour Policy and Training held in Tokyo on March 8th and 9th, 2010 – details the regulatory approaches to fixed-term contracts in major industrial jurisdictions in Asia and Europe, providing an opportunity to explore normative directions for labour law and policy in the age of a diversified workforce.

• legal consequences of violation of regulations on fixed-term employment contracts;

• exceptions for certain groups of workers;

• permissibility of derogation by collective agreements;

• circumstances under which law on dismissal may be applied to an employer’s refusal to renew a fixed-term contract;

• equal treatment between workers on fixed-term contracts and those on open-ended contracts;

• problems fixed-term workers may face in the country’s social security system; and

Each author takes into account evaluations from scholars, policymakers, and stakeholders to his or her country’s regulatory approach to fixed-term employment contracts, revealing an array of responses ranging from a view that such contracts enhance employment opportunities in society to advocating suppression of their use as inherently abusive and discriminatory.

The combined effect of these nine essays is to greatly increase our awareness of the nature of fixed-term employment contracts, from their fundamental value as social policy instruments to their inextricable connection with the law of dismissal. The book sets the stage for deeper and more firmly grounded work that promises to elucidate the underlying pattern of a new employer-employee relationship emerging on a worldwide scale.