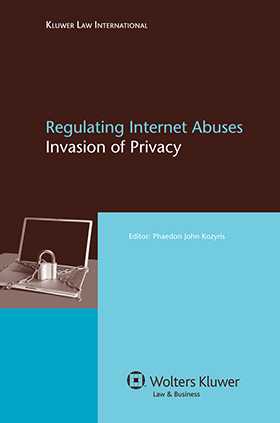 
Spam—unsolicited, unwanted commercial communication, especially in bulk form—is increasingly included in the areas of concern and regulation of governments worldwide. Unfortunately, this recognized and exponentially growing menace has not yet met its regulatory match. Piecemeal controls, lack of international cooperation, and the absence of an overall policy on combating patently intrusive and unwanted messages in all channels of communication hamper the struggle. The present volume contains eleven national reports, together with a general report, on this major problem that is presently burdening and distorting communications through the Internet. Most of the reports were presented at the XVIIth Congress of the International Academy of Comparative Law held at Utrecht, the Netherlands on July 19, 2006. The authors have had the opportunity to revise and update their texts before they were submitted here for publication. The national reports are from Denmark, France, Germany, Greece, Italy, Poland, Spain, South Africa, Switzerland, the United Kingdom, and the United States. Starting from some common assumptions—including respect for freedom of expression; emphasis on “unsolicited,” “bulk”, “automated” messages to strangers; and non-interference with the normal use of the Internet—the contributors set out to tackle spammer elusiveness and the difficulties of cross-border coordination that plague this field. Among the broadly conceived legal responses they consider are the following:


The reports provide documentation and analysis of the various ways in which these approaches have been used, or can be used, in legislation and case law in a variety of national and international fora. Workers in all fields of communications, from technologists to legal practitioners and academics to administrative policymakers, will benefit enormously from these syntheses and insights.