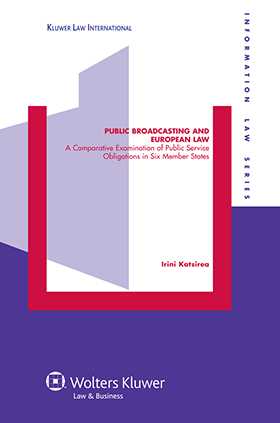 Although EU Member States share a tradition of regulating public broadcasting for the public interest, such regulation has been in decline in recent years. It has been challenged by the emergence of commercial television sworn to the market logic, as well as by satellite services and the Internet. EU law and policy has, under pressure from powerful global forces, abetted that decline. The question thus arises: Do cultural values still matter in European national broadcasting?

This important book examines the challenges posed to public service obligations by European Union media law and policy. An in-depth analysis of the extent to which six countries (France, Germany, Greece, Italy, the Netherlands, and the United Kingdom) regulate broadcasting for the public interest reveals a range of vulnerability to national political pressures or, alternatively, to the ideology of market sovereignty. The author examines the country of origin principle and the European quota rule of the Television without Frontiers Directive, revealing the influence of European law on the definition and enforcement of programme requirements, and shows how the case law of the European Court of Justice encourages deregulation at the national level without offering adequate safeguards at the supranational level in exchange. She asks the question whether the alleged ‘European audiovisual model’ actually persists—that is, whether broadcasting is still committed to protecting such values as cultural diversity, the safety of minors, the susceptibility of consumers to advertising, media pluralism, and the fight against racial and religious hatred. The book concludes with an evaluation of the impact of the EU state aid regime on the licence fee based financing of public broadcasting.

Despite the increasing importance of the subject, its study in a comparative context has been heretofore underdeveloped. This book fully provides that context and more, and will be of great value and interest to all parties concerned with the key role of communications in the development of European integration.