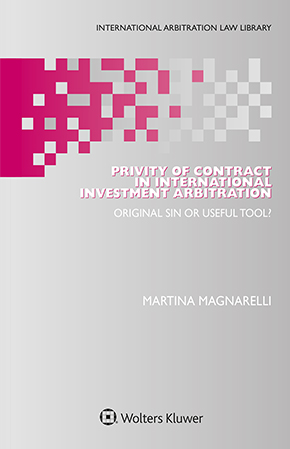 Privity of Contract in International Investment Arbitration elaborates in detail on the interpretation and application of the doctrine of privity of contract to investment treaty disputes. At least on one occasion privity of contract (or the lack of it) has been described as an ‘original sin’ for international investment arbitration. Privity of contract essentially means that a subject must be a party to a contract, to acquire rights and assume obligations, to sue and be sued under that contract. But is privity of contract the reason why investor-state dispute settlement (ISDS) is open to criticisms, or could it contribute to solving the system’s legitimacy crisis? Arbitral tribunals often need to decide whether they have jurisdiction in cases where a party to the investment contract is not the claimant but a related entity, or not the central government, but a state agency or state-owned enterprise. In light of the deep interconnection between, on the one hand, the criticism surrounding investment treaty arbitration – be it judicial activism and regulatory chill or abuse of law and indirect claims – and, on the other hand, the domains where privity of contract applies, this book’s original and far-reaching analysis comprehensibly lays out a possible use of the doctrine that can contribute to leading ISDS out of the crisis.

What’s in this book:
The thorough and extensive examination of investment treaty arbitration case law draws comparisons with other international adjudicatory bodies and identifies the most actual and compelling unresolved legal issues. The study’s conclusions respond with thoroughly researched authority to such key questions as the following:

The author finds that the doctrine of privity of contract finds application in heterogeneous scenarios, from decisions on jurisdiction where there are forum selection clauses in investment contracts or fork-in-the-road provisions in investment treaties, to consolidation, counterclaims and umbrella clause claims. She proposes a flexible interpretation of the doctrine of privity of contract as a guiding principle that arbitral tribunals should consider along with other factors (inter alia the tightness of the relation between the investor and its subsidiary and the host state’s involvement in the organization and function of agencies or state-owned enterprises). Appendices include lists of many of the arbitration cases, international judgments and national judgments discussed in the book.

How this will help you:
As a constructive contribution to the current debate, this study is an extraordinary achievement. No other study has conducted such thorough research on the application of privity of contract in investment treaty arbitration. A systematic study of case law helps in shaping a consistent jurisprudence to the benefit of the system and its users. This huge volume of research condensed in an easy-to-read format will be of great interest to arbitration practitioners, arbitrators, foreign investors, host states and scholars in all areas of international arbitration and dispute settlement.

CHAPTER 2
Arbitral Tribunals’ Jurisdictional Scope and Privity of Contract: An Ever-Relevant Element in the Current Debate over Investment Treaty Arbitration

CHAPTER 3
The Unresolved Conundrum of Contract-Based and Treaty-Based Claims: An Extra Element of Contention – Privity of Contract

CHAPTER 5
Privity of Contract and Treaty Guarantees: Analysis of the Merits