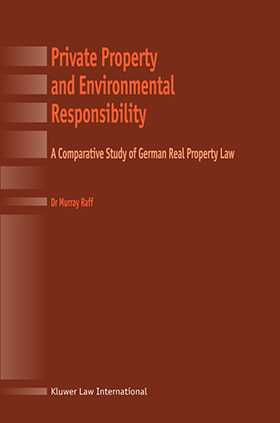 Qty.
Add to Cart
* For general delivery times, please see our Shipping Policy
Share
Overview
The concept of absolute private property¿by which an owner can do whatever he wishes with what ¿belongs¿ to him¿has been attacked in many ways, but no challenge brings it into question with such strength as the awareness of continuing environmental degradation in virtual contempt of sustainable development. Throughout the twentieth century and into our own era, legal property rights have time and time again been successfully invoked by polluters and others interested in evading ecological imperatives. However, most jurists today would agree that the internationally acknowledged necessity for land use to be administered in ecologically sustainable ways is plainly a principle that should be harmonized across national boundaries.

This remarkable new book is not a radical text, but seeks to find a principle of responsible proprietorship in our existing legal systems. And in fact it presents an excellent case for the international recognition of a principle of responsible proprietorship in the title registration systems derived from the German model, rooted in the historical Hanseatic model; primarily the Australian Torrens system that spread throughout the British Empire from the mid-nineteenth century on. In great detail, the author demonstrates that this system offers a firm foundation on which a truly responsible environmental law of property can be established.

Dr Raff identifies the German model of land title registration as the modern globalizing trend. It has been freely adopted in jurisdictions as widespread as Eastern Europe and Asia, and it is the model favoured by international capacity building and funding agencies of the UN, World Bank and IMF, to the extent that it may now be described as the international model and future internationalization is pressed onward. The unfolding of responsible proprietorship in German land law has demonstrated the potential for the international model similarly to unfold. Certainty in land transactions is the ostensible rationale of title registration, but as Raff shows, implicit in the land title registration obligation is a wider responsibility of landowners with respect to their land stemming from their property in it, thus opening a juridical window to environmental imperatives. Philosophically, connection between the necessity for publicity of land transactions and wider responsibility may be traced back to the classical and modern Natural Law traditions.

The comparative law methodology adopted by Dr Raff builds on reception theory and emphasises what lies in common between local systems derived from international models rather than how difference might be magnified. In this vein, the work concludes with inspiring directions toward future research into how the principle of responsible proprietorship might be identified in other land title models conceived around the necessity for publicity in land transactions; specifically, the French, Spanish and Portuguese registration systems and systems derived from them, and the deeds registration systems of North America.

Private Property and Environmental Responsibility offers a rigorous and persuasive approach to a major current issue that finds, through the legitimate processes of legal reasoning within our own existing systems, viable solutions to the unprecedented environmental problems posed by our technological age. It is a seminal work that will be valued and consulted for decades to come by environmentally-conscious lawyers at every level of national and international law.