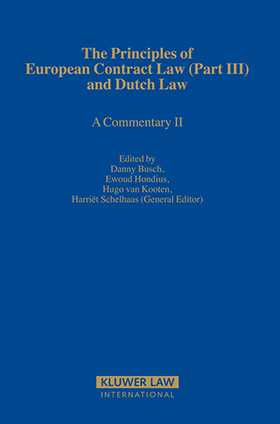 Qty.
This product is available for the standing order program. Learn More
Add to Cart
* For general delivery times, please see our Shipping Policy
Share
Overview
The Principles of European Contract Law, prepared by the so-called Lando Commission, today constitute the most advanced project on the harmonisation of European private law.

As well as providing a set of rules which could facilitate cross-border trade within Europe, the Principles can be seen as a modern lex mercatoria which, for example, could be referred to by arbitrators deciding a case according to internationally accepted principles of law.

Furthermore, the Principles provide a framework for EU legislation on contract law and, more importantly, they can be viewed as a first step towards a European Civil Code. They may also prove to be a catalyst for the development of national legislation, judicial decisions and legal doctrine.

This new title, which follows the first volume covering Parts I and II of the Principles, includes chapters on plurality of parties, assignment of claims, transfer of contract, set-off, prescription, illegality and conditions. It provides a systematic overview of the Principles in comparison with Dutch law, which will be of interest not only in the Netherlands but also to lawyers in other countries who need to gain a clearer understanding of the Dutch contract law system.