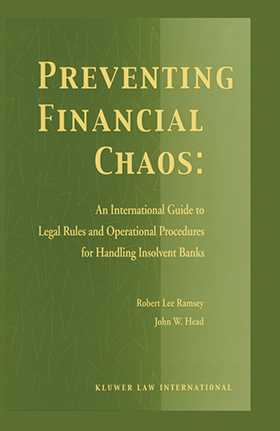 Qty.
Add to Cart
For general delivery times, please see our Shipping Policy
Share
Overview
There is a fundamental reason, the authors of this book contend, why national financial systems falter and collapse: the failure of central banks and other supervisory authorities to deal promptly and decisively with insolvent banks.

In Preventing Financial Chaos, Ramsey and Head, both well-known to the international banking community for their restructuring services in developing and transitional economies, take a no-nonsense attitude and show exactly how to usher a problem bank out of the financial system in any country. Their clearly defined rules and procedures build disciplined, competent action that activates political will and successfully curtails systemic chaos.

With this nuts-and-bolts guide, policymakers, legislators, central bank officials, and representatives of international financial institutions will be able to achieve the following: