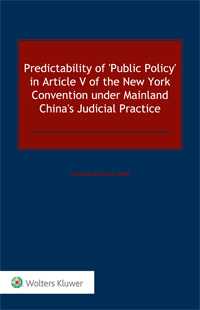 Predictability of ‘Public Policy’ in Article V of the New York Convention under Mainland China’s Judicial Practice, as the name suggests, focuses on the Chinese courts’ application of the ‘public policy’ exception stipulated in Article V of the New York Convention. Whether a foreign arbitral award can be recognised and enforced by the Chinese courts has always been on the top of foreign parties’ list of concerns. As the ‘public policy’ exception is more uncertain than most other legal concepts, it tends to be argued when other points fail. This book – a major contribution to understanding theory and practice related to the public policy exception – provides a comprehensive understanding on how the term ‘public policy’ specified in Article V of the New York Convention has been interpreted and applied by the Chinese courts.

Including detailed commentary and analysis of cases where the Chinese courts refused to recognise and enforce a foreign arbitral award on the grounds of violation of public policy, this book investigates issues and topics such as the following:

The author’s method of analysis and interpretation of laws and regulations while observing the circumstances of their application in specific cases greatly clarifies the predictability of how the public policy exception will continue to be interpreted and applied by the Chinese courts.

As a guide to the ‘dual-track’ system under the Chinese arbitration law, this book helps practitioners handle applications confidently with Chinese courts for recognition and enforcement of foreign arbitral awards with full awareness of the limited ‘gaps’ between Chinese judicial practice and international consensus. Thus, this book serves as a handbook to corporate counsel, lawyers, international arbitrators and other parties to respond to the public policy exception with legally sound arguments in compliance with applicable law.