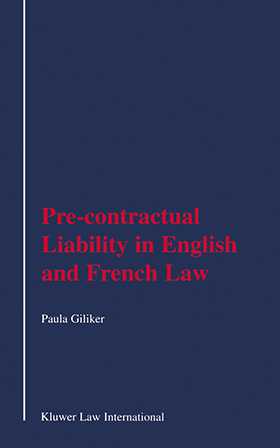 Qty.
Add to Cart
* For general delivery times, please see our Shipping Policy
Share
Overview
This book examines the nature of pre-contractual liability in English and French law and the extent to which the arguments of risk determine the imposition of liability during the negotiation process.

The book is divided into three parts. Dr Giliker first examines potential contractual liability, followed by a study of liability outside contract, namely in the fast-growing law of restitution, enrichissement sans cause, tort, delict and the equitable doctrine of estoppel.

The final part deals with proposals for reform and draws a number of conclusions, highlighting, in particular, the policy influences on the law. Drawing on her extensive knowledge of both systems, Dr Giliker reviews the relevant legal authority and academic literature in this field, focusing on the difficult, but practically important, question of liability for services performed in anticipation of a contract.

The book offers a comprehensive picture of the current legal position in England and France and a fresh perspective on this commercially significant area of law, which is likely to be of relevance to anyone interested in this area of law or in obligations law in general.