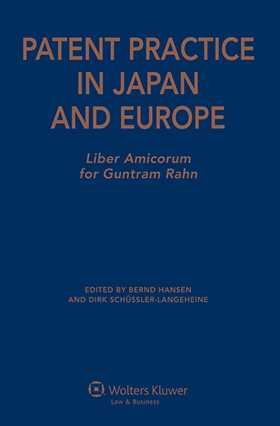 More than 60 authors – supreme and high court judges, law professors, legal specialists in corporate and private practice – from Europe, East Asia, and the United States contribute original essays to this excellent compilation of the current issues regarding the laws and practices in intellectual property in Europe and Japan.

The articles cover a broad spectrum of subjects, including the procedural implications of litigation, international jurisdiction, doctrines of exhaustion, utility model systems and practice, and employed inventor’s compensation, as well as the special aspects of pharmaceutical patenting such as obtaining supplementary protection certificates. Many of the articles also include a comparative analysis of the laws and practices in both geographical regions or deal with the same legal issues but in different jurisdictions, for instance:

Its authoritative articles in the English language make this volume required reading for all professionals working in the field of intellectual property law.

Chapter 6. Patent Practice in the Field of Pharmaceuticals