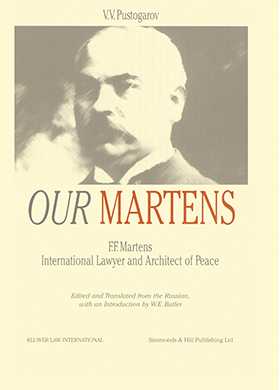 Qty.
Add to Cart
For general delivery times, please see our Shipping Policy
Share
Overview
The rule of law, peace, disarmament, human rights: these are no longer empty words, but legal concepts steadily gaining force among nations. If the slow but sure codification of international law that began with the first Geneva Convention of 1864 has put down roots, against all odds, it is because of the passionate determination of a few visionary but practical actors on the world's stage. Pre-eminent among these `workers in the dawn' was the Russian jurist, diplomat and arbitrator F.F. Martens (1845-1909).

Although Marten's reputation suffered during the Soviet era and on both sides of the Cold War, the lasting effect of his ideas and initiatives can be traced all the way from his early years as a Law Professor at Petersburg University (when his writing attracted the attention of the Czar), through his direct participation in the great Peace Conferences at Brussels and The Hague, to the legal underpinnings of the human rights regime embodied in today's international conventions and tribunals.

His sense of community and the individual in a global context – a difficult notion for lawyers to grasp in a world of competing nation-states – has now become a widely-accepted norm with increasingly effective enforcement mechanisms. And even his contributions to procedural theory, in areas such as extradition of political criminals and transnational enforcement of administrative law, persist in coming to the forefront of today's international legal practice.

This English translation of the first major biography of Martens is in fact the most complete text in any language, as the Russian author, at the translator's request, took the opportunity to revise his original work and even supplied two whole chapters missing from the original Russian edition of 1993 and subsequent editions and translations.

Pustogarov was among the first scholars to gain access to the near-legendary Archive of the Foreign Policy of Russia, and his biography of Martens contains a wealth of hitherto unavailable information on the more-or-less secret political maneuvers of the `Great Powers' in Martens' time.