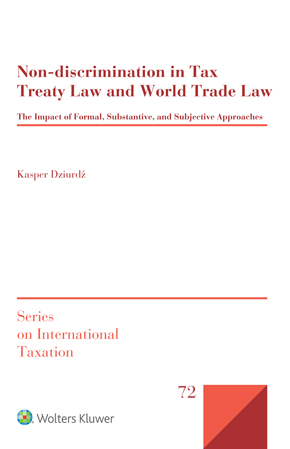 The author’s thesis, on which the book is based, was awarded the Wolfgang Gassner Science Prize 2019 and received an Honourable Mention for the Mitchell B. Carroll Prize 2019 of the International Fiscal Association.

What’s in this book:
Among the practical issues affecting non-discrimination examined in detail are the following:

The author establishes to what extent formal, substantive and subjective approaches may be applied in a non-discrimination analysis, providing the reasons for the approaches taken. A two-step comparability procedure is applied to selected cases of potential tax discrimination, demonstrating how policy arguments can be addressed under Article 24 of the OECD Model.

How this will help you:
Drawing on over a half-century of case law in both areas of practice, this comprehensive study of the non-discrimination rules under WTO law and international tax law will be invaluable in systematically solving cases of tax discrimination under Article 24 of the OECD Model and putting forward arguments at any stage of a WTO analysis. Policymakers will benefit from the author’s clear explanation of how national law should comply with international obligations. Also, taxpayers’ advisers will proceed confidently in claims of tax treaty discrimination, and academics will discover an incomparable overview and analysis of anti-discrimination rules in international trade law and double taxation conventions.

CHAPTER 2
General Non-discrimination Rules of the GATT and GATS

CHAPTER 3
Article 24 of the OECD Model: Tensions and Unresolved Issues