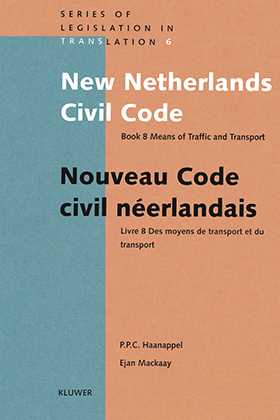 Available: Ships in 3-5 Business Days
Price
$260.00
Qty.
Add to Cart
Share
Overview
This trilingual volume (Dutch, English and French) contains the provisions of the Netherlands Civil Code dealing with transport law (Book 8 of the Code). Included are those parts which were in force summer 1995: general provisions, maritime law, inland waterway law, road transport law, the law pertaining to the carriage of dangerous substances, and final provisions. Future editions of this volume will be supplemented with other modes of transportation, as they are added to the Code.

The translations from the original Dutch into English and French have been prepared under the auspices of the Netherlands Ministry of Justice. The two translators, both legally trained in the Netherlands as well as abroad, are Professor P.P.C. Haanappel, Director European Affairs, International Air Transport Association, Geneva, and Adjunct Professor McGill University in Montreal, and Professor Ejan Mackaay of the Faculty of Law, University of Montreal.