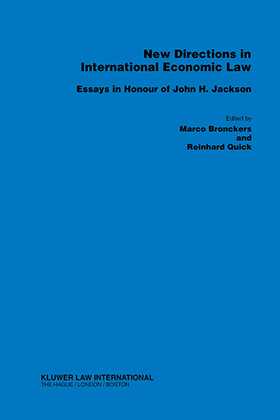 Qty.
Add to Cart
* For general delivery times, please see our Shipping Policy
Share
Overview
This book was occasioned by the 30-year anniversary of the appearance of Professor John H. Jackson's remarkable book, World Trade and the Law of GATT, which pioneered the new academic discipline of international trade law.

Professor Jackson's approach has been unique in its emphasis on a multidisciplinary approach, which places the subject in its proper context--by examining international trade law not only in relation to economic considerations but by broadening it to include wider societal concerns such as environmental, national security, human rights, and labour standards issues. Accordingly this book, in Professor Jackson's honour, reflects his role as a forerunner of the law of globalization, addressing in particular the links between trade law and public international law, and the connections between trade and other societal concerns.

The book is divided into five sections, dealing with: constitutional issues; substantive issues for the WTO; dispute settlement in the context of the WTO; new subjects relating to the WTO system including trade and labour; trade and competition, trade and investment, bribery and corruption, and domestic issues for WTO member countries.

After a long and distinguished career at the Law School of the University of Michigan, Professor Jackson joined the faculty of Georgetown University in 1998, as University Professor.