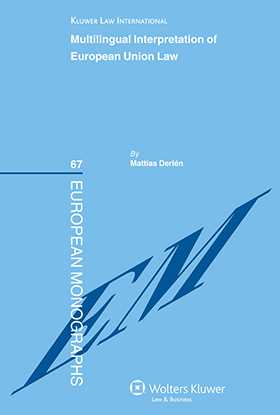 
According to many scholars, Community law simply cannot be understood without taking its multilingual character into account. The equal authenticity of all language versions of a Community provision, and the danger of diverging meanings between versions, imply a duty to consider the various versions when interpreting or applying laws. At the EU level, this duty can be said to be reasonably adhered to, considering the enormous strain on the Union’s translating service (there are now twenty-three authentic and working languages used in the EU institutions). However – as this important book reminds us – the day-to-day interpretation and application of Community law actually takes place in the many and various courts and tribunals of the Member States.

For the first time in European law scholarship, Mattias Derlén provides an in-depth analysis of the actual use of multilingual interpretation of Community law in national courts. He has sifted from the (mostly recent) history of high courts (and some lower courts) in Germany, England, and Denmark some 186 judgements in which the courts diverged from reading the national language version in isolation by admitting one or more other language versions of a Community provision. In each instance he closely investigates:

Denmark, England and Germany were chosen because they represent three of the classical Western legal families – the Scandinavian (Nordic) law, the common law and the civil law traditions. In this connection, the author clearly demonstrates that the shortcomings of national courts that emerge from the study result not only from practical constraints, but also from features of legal culture and basic notions of the law in the particular jurisdictions.

Multilingual Interpretation of European Union Law offers a superb foundation for further work in an area of European law that is gathering greater significance day by day. Although it goes without saying that any scholar or student engaged in studying the multilingual aspect of European law will find this book indispensable, there is also an important place for this knowledge among academics and practitioners generally, given the pervasive effects of language and translation in interpreting Community law.