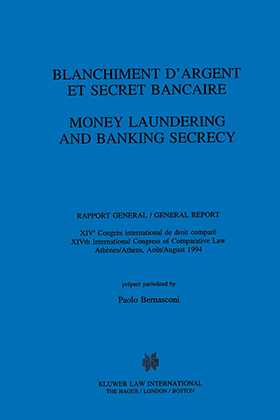 Qty.
Add to Cart
For general delivery times, please see our Shipping Policy
Share
Overview
Contains thirteen national reports and the general report on Money Laundering and Banking Secrecy. The reports were written for the XIVth Congress of the International Academy of Comparative Law which was held in 1994 in Athens, Greece.

As narcotics trafficking exploded in the 1980s, it was realized that money laundering had become a threat to the entire integrity of the financial system. The international trend to regard money laundering as a serious threat to the stability of democracy and the rule of law found expression in the adoption of the 1988 United Nations Drugs Convention.

Gradually, the international community diverged from its traditional, narrow approach whereby only the laundering of drug proceeds was considered a threat. In order to combat money laundering efficiently, it soon became clear that criminal law was not sufficient and that it was necessary for banks and other financial institutions to co-operate with law enforcement agencies.

The banking community is now obliged to report suspicious transactions, which they often regard as going beyond their role as bankers. The issue of bank secrecy has played an important role in the discussion between law enforcement agencies and the banking community. Both the Council of Europe Convention on Laundering Search, Seizure and Confiscation of the Proceeds from Crime and the UN Drugs Convention require that bank secrecy should not be an obstacle to international co-operation. At the national level the seizure of bank records should not be hindered by bank secrecy.