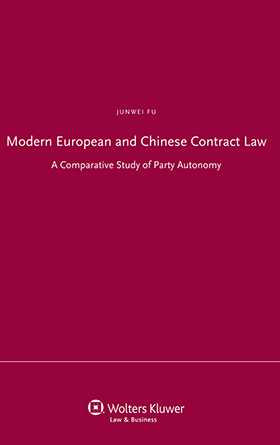 In modern contract law, party autonomy as expressed in the idea of the freedom of contract is a fundamental principle that people have struggled for centuries to realize. Both China and Europe exhibit this tendency, although in distinct ways that are deeply rooted in the two regions’ historical and cultural backgrounds. In Europe, freedom of contract is limited by principles of good faith, fair dealing, social justice, and fundamental rights. In China, the traditional notion of contract ‘voluntariness’ is understood broadly to include collective interests and interests of the state – restrictions that can appear to undermine the very notion of ‘freedom of contract’. But the situation is far from that simple, as this unique book superbly demonstrates.

This comparative study of European and Chinese contract law opens a clear and practical way to identify and understand the differences between the two legal regimes. The author offers a detailed doctrinal comparison of the two systems of contract, focusing on the following fundamental elements:

• the importance of socio-economic valuation in Chinese contract law;

• the role of judicial interpretation;

• adaptation and termination – effect of registration and approval rules;

The book’s special power lies in its extraordinarily thorough comparison of doctrines underlying specific provisions of such instruments as the Contract Law of the People’s Republic of China (CLC), the General Principles of the Civil Law of the People’s Republic of China (GPCL), the Principles of European Contract Law (PECL), and the Draft Common Frame of Reference (DCFR), as well as analysis of judicial cases.