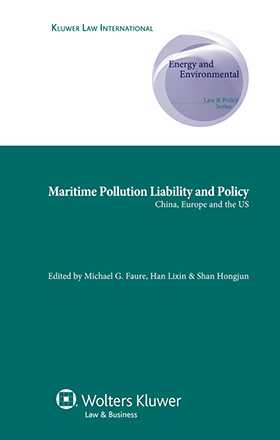 Maritime Pollution Liability and Policy. China, Europe and the U.S.

Too many oil spills have given dramatic evidence of the inadequacy of international conventions designed to prevent and/or compensate for maritime pollution damage. In the light of the ecological disaster caused by such incidents and the huge economic consequences for the population of the zones affected, various concerned parties around the world are deeply committed to the goals of optimizing legal mechanisms to prevent and deter maritime pollution incidents as well as providing better and more efficient compensation of victims. One of the more notable conferences dedicated to this purpose was sponsored by the Institute of International Maritime Law of Dalian Maritime University in conjunction with the Maastricht European Institute for Transnational Legal Research in June 2009. This important book is a record of that conference.

Twenty-nine authors – academics, lawyers and officials of relevant agencies, from China, Europe and the United States – here offer thorough analysis of the overt and underlying legal issues with which this difficult matter is fraught, including the following:

• relevance and application of the public trust doctrine;

• carriage of dangerous substances by sea;

• role of the ‘protection and indemnity clubs’;

• monitoring and inspections of ships as an aspect of criminal law; and

The approach throughout is both legal multi-disciplinary and comparative. The relevant international conventions are examined (particularly the ‘Bunker Convention’ of 2008), with particular attention to their implementation in China and Europe, as well as the independent US regime. In addition, detailed empirical data from well-known case studies provide important insights into the working of international and national prevention and compensation mechanisms.

Through a critical review of the current structure of prevention and compensation for oil pollution damage, this book opens the door to a further restructuring of conventions (or national legislation), clarifying the dimensions of the crucial discussion about of how an optimal enforcement of oil pollution legislation can be achieved and who should bear the costs. It will be hugely valuable to policymakers and practitioners dealing with this most daunting and urgent of international legal problems.

"This is a lively and enjoyable collection of papers and an illuminating review of the considerable difficulties that China will face implementing key liability conventions in future years."