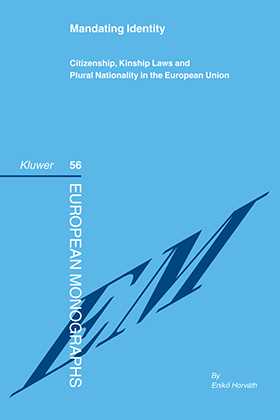 For over a century it has been the case that a person exists, at least for legal purposes, only after she has been recognized by the state. As a unique element of this acknowledgement, nationality has also been an essential component of individual identity. Now, under pressure from a variety of directions, the nature of the link between state and individual is changing, with as yet unclear implications and long-term effects.

In this original and insightful analysis, Enikő Horváth focuses on three processes of legal evolution in Europe that affect the meaning of membership and individual identity:

• the increasing salience of supranational ‘culture’ and rights;

• ‘kinship’ legislation privileging non-nationals with linguistic, cultural, and ethnic ties to a given state; and

• the emergence of plural nationality as an acceptable (and even welcome) phenomenon.

The author’s treatment is notable for its informed appreciation of both the content of relevant European and national laws and the ways in which these laws are embedded in particular social and political frameworks. In addition to extending the legal theory on citizenship and nationality, the analysis draws on sociology, social psychology, and political theory to anchor its insights and recommendations. After two in-depth chapters introducing the complexities of the subject matter, three distinct but interwoven chapters show how each of the three processes has unfolded in a given context, offer detailed explanations and suggestions as to why each development has occurred in the manner that it has, and discuss the legal, political, and sociological issues raised by the particular development. A comprehensive reference section with extensive lists of laws, cases, and scholarship concludes the volume.

It is likely that this book will come to be recognized as a foundational work in the legal analysis of the concept of ‘cultural identity’, and especially its role in setting norms of membership, as that way of seeing the world becomes ever more clearly defined in coming decades. It is sure to be not only studied and cited by academics and legal theorists, but of special value also to policymakers in the areas of nationality and citizenship.

I. Introduction. II. Basic Concepts. A. Nationality. B . Citizenship. C. Individual and Collective Identities, as Concept and as Right. III. European Union Citizenship. A. The Idea of European Identity. B. The Role of Culture in the European Union. C. European Citizenship, or the Question of Instrumentality. D. Final Considerations. IV. Kinship Laws. A. Emergence of a New Phenomenon. B. The Hungarian Status Law. C. The Evolution of a Concept. V. Plural Nationality. A. The Traditional Approach and Recent Legal Evolution. B. Transformation in Germany. C. Variations on the Theme of Adaptation. D. Tendencies of Development. Conclusion. References. A. Primary Materials. B. Cases. C. Literature.