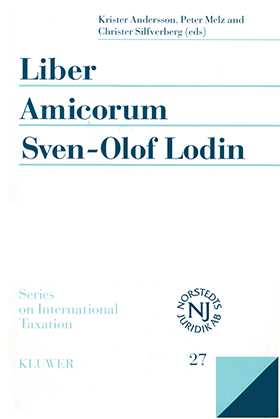 Qty.
This product is available for the standing order program. Learn More
Add to Cart
For general delivery times, please see our Shipping Policy
Share
Overview
In the field of international tax law, only a handful of scholars have had what it takes to actually affect policy. In recent decades (he is 65 on August 8, 2001), Sven-Olof Lodin is clearly among that distinct group. The influence of his work in the academic and business worlds has echoed far beyond his native Sweden (where he is honoured as one of the principal architects of the major tax reform of 1990) to the global context, where his great contribution has been signally recognized by his election in 1998 as the first Nordic president of the International Fiscal Association.

He was a founding member of the Nordic Tax Research Council, which has done so much to ensure cooperation in tax matters between the Nordic countries. As a delegate of the Federation of Swedish Industries, he has participated in working groups at the European level and presented models of corporate taxation that are visible in EU tax policy.

His colleagues and friends respect him not only for his notable achievements but also for the strong sense of justice that characterises his radical proposals for reorientation of the tax system. In this festschrift, 25 tax law scholars from all over the world confront some of the problems that have preoccupied Lodin -- cross-border income flows, tax treaties versus national codes, EC law versus national law, VAT, e-commerce income, and much more.

Anyone, legal or business or academic, concerned with international taxation will benefit substantially from these insightful essays.