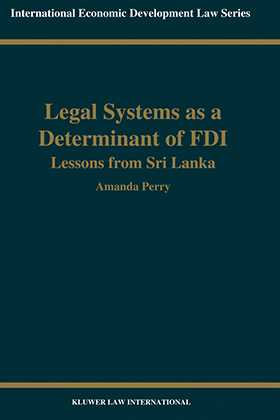 Legal Systems as a Determinant of FDI, Lessons from Sri Lanka

Qty.
This product is available for the standing order program. Learn More
Add to Cart
* For general delivery times, please see our Shipping Policy
Share
Overview
Amanda Perry poses a formidable challenge to the current consensus on the best way to reform legal systems in order to attract and support foreign direct investment (FDI) in developing countries. Using detailed examples from Sri Lanka, she shows that the "ideal paradigm" approach to legal reform espoused by multilateral development organisations and bilateral aid donors is not only fundamentally flawed, but misconceived for reasons that we may not fully understand.

She recommends a shift in emphasis from the "global" legal reform agenda to a country-specific approach, based on a rigorous formulation of the common ground where the expectations of investors and the countries in question meet.

The crux of this "ideal paradigm" approach resides in the generally accepted belief that a Western-style market-oriented, rule-bound legal system is the sine qua non of successfully attracting and supporting FDI. However, through a wide-ranging survey of Sri Lankan and foreign business people, lawyers, non-legal advisers, NGO workers, diplomats, development workers, and government officials, Perry shows that this is far from the case.

Investors are generally insensitive to the nature of the host state legal system when making the decision to invest, and their perceptions and expectations of the host state legal system may be significantly affected by such factors as their nationality, export orientation and size. Perry suggests that the conclusions drawn from this detailed analysis from Sri Lanka, applied on a global scale, have the potential to greatly improve the quality of many developing countries' participation in the world economy.

Part 3: Case Study of Sri Lanka
1. Foreign Investment in Sri Lanka
2. The Legal System as a Factor in the Decision Making Process of Foreign Investors
3. The Ideal Paradigm and Attracting FDI to Sri Lanka decisions
4. The Possible Role of Investor and Investment Characteristics