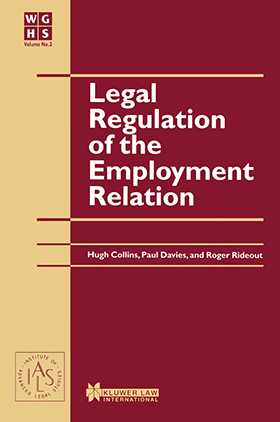 Legal Regulation of the Employment Relation

Qty.
This product is available for the standing order program. Learn More
Add to Cart
* For general delivery times, please see our Shipping Policy
Share
Overview
Discussion of labour law issues from a regulatory perspective is often heavily influenced by certain types of economic analysis and tends to support deregulation of labour markets. While many European countries and the EU itself are committed to ideals of labour standards expressed in such documents as the Charter of Social Rights, there is a noticeable hesitation in enacting these rights due to the fear of adverse economic consequences.

The essays in this volume aim to redress the balance in the contemporary regulatory debate by embracing other interdisciplinary perspectives and scrutinising carefully the justifications for and against special regulation for employment contracts. The book examines labour law as the regulation of a particular kind of contractual relationship, that is, contract of employment, and of the institutional framework, including trade unions, collective bargaining, managerial hierarchies, government departments and agencies, within which it operates. This perspective differs from that of most contemporary studies of labour law by emphasising its public, regulatory character, rather than its origin in private law.