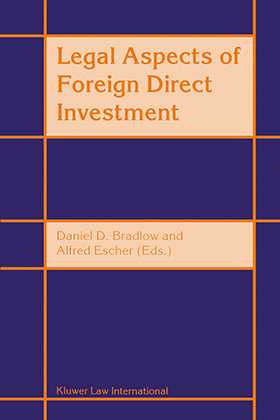 Qty.
Add to Cart
For general delivery times, please see our Shipping Policy
Share
Overview
Two of the distinguishing features of the law on foreign direct investment (FDI) are its complexity and its creativity. The law on FDI embraces the domestic rules and regulations dealing with foreign controlled businesses as well as the numerous bilateral and multilateral legal instruments. It is influenced by awards of international arbitration tribunals as well as numerous other sources. Consequently, it is always changing.

The various actors involved, including transnational corporations, local companies, investment promotion agencies, and multilateral donors, as well as lawyers advising foreign investors or their local counterparts and financial intermediaries, each follow their own interests. By its nature, FDI involves the interaction, and sometimes the clash, between different legal concepts of the participants and regulators.

Counsels to local governments and domestic partners in a joint venture with foreign companies may not always be accustomed to legal documentation in an Anglo-American or continental European style. As a result, dealing with FDI requires an ongoing learning process for all who wish to understand and successfully manage foreign investment transactions.

All this elucidates the need for a multi-author book which covers various areas of the law on FDI from different perspectives. The authors of this book are all concerned with FDI as either academics or practicioners and come from a variety of legal, academic and geographical backgrounds. The book consists of three parts: