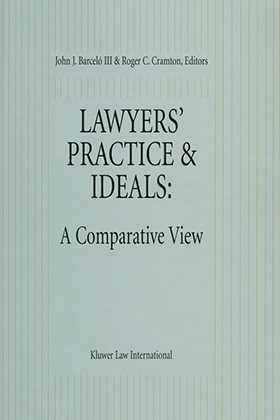 Qty.
Add to Cart
* For general delivery times, please see our Shipping Policy
Share
Overview
As the process of internationalization accelerates, comparative law scholars inevitably focus on the adaptation of legal cultures to new realities. It is particularly important, in the global world order as it stands today, to understand (as best we can) the `inner workings' of two groups of lawyers: those in the United States, and those in the major European countries.

In which ways do the two groups understand each other, and where do they go their separate ways? And what are the implications for the legal profession and its beneficiaries of their cultural and ideological differences?

At a symposium held in Paris twelve scholars from Europe and the United States met to investigate and clarify these issues under two intimately related rubrics: realities and trends on the one hand, and ethics, rules and professional ideologies on the other.

The participants have updated their original papers for this publication. In the course of their discussion they reveal which cultural realities persist and are likely to remain, and which trends are broadening the common ground on which lawyers act in both cultures. The result is the sharpest delineation we have yet of this vital concern of current comparative law.