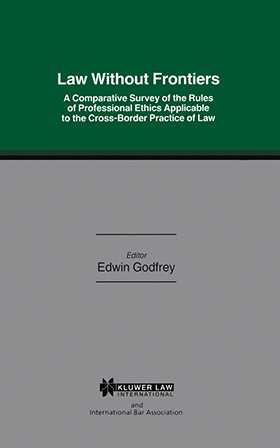 A separate chapter deals with the development in the context of the European Union. The study is based on a questionnaire of the IBA Section on Business Law Subcommittee on the Structure and Ethics of Business Law.

Part One of each country's report covers the basic rules applying to the domestic legal profession, such as the method of qualifying as a lawyer, the extent to which the legal services are reserved to lawyers, and the ethical rules which apply to matters like advertising, fees, correspondence, etc. The Second Part sets out what rules the jurisdiction in question imposes on its own lawyers when they are involved outside the jurisdiction.

The Third Section deals with the rules which apply to a foreign lawyer (which includes any lawyer admitted in another jurisdiction but not in the local jurisdiction under discussion) practising within the jurisdiction. Both the second and third parts are divided according to the various degrees of possible involvement, ranging from merely advising a foreign client from one's home office to practising from an office in the foreign country.

The last Part deals with the various kinds of international associations to which lawyers may belong, such as alliances, office-sharing, and multinational and multidisciplinary partnerships. The editor draws conclusions in the last chapter and sets out where the cross-border practice is heading. A number of useful appendices are supplied, setting out the most important texts, including the IBA International Code of Ethics.