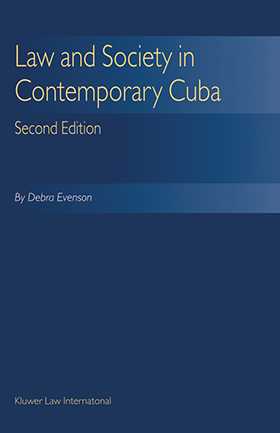 Qty.
Add to Cart
* For general delivery times, please see our Shipping Policy
Share
Overview
Every society must find a way to resolve the tension between individual interests and the common good. Today, poorer nations bear the added burden of sagging economies and colossal debt, hardly a sound basis for sustaining a semblance of civil rights or social justice. Cuba stands apart, as a small and poor country, which nevertheless has established standards of access to education, health care and housing that are among the highest in the world. An understanding of the legal system that has fostered and continues to protect this singular achievement offers inarguably important lessons for the global legal and policy-making community.

Debra Evenson's eloquent analysis of Cuban law and society first appeared in 1994, and remains the only detailed, first-hand treatment of the subject. This thoroughly revised second edition incorporates the many changes that have taken place in Cuba during the last decade. The author finds a regime still unalterably committed to preserving fundamental principles of socialism, even as it struggles against enormous odds to maintain a secure place in the global economy.

As it analyzes the substantive and procedural issues of the various fields of law, judicial administration and legal practice, Law and Society in Contemporary Cuba explores at every turn the ongoing 'reinvention' of socialism that Cuba has chosen to pursue. Cuba's commitment to a sustainable socialist economy in the prevailing market-driven global context colors the numerous recent reforms that introduce decentralized decision making and management at local and enterprise levels. The author explains the effects of de-subsidization of state enterprises on legal issues arising in labor-management relations, banking, and taxation, and describes new 'private' initiatives such as expanded areas of foreign investment, individual ownership of farms, and increased self-employment incentives. Other fields of law covered include criminal justice, family law, environmental regulation, intellectual property, and judicial procedure.

Ms. Evenson does not turn a blind eye to the undeniable limitations on freedom of expression and political association imposed by Cuban law. However, her analysis also reveals the express and persistent U.S. hostility and efforts to undermine the current government that have a direct impact upon reducing the political and legal space for spontaneous debate inside Cuba. In doing so, she does readers an additional service by allowing us to reflect on the outcomes of one of Washington's most consistent foreign policy directions over the past four decades.

By illuminating the relationship between law and social policy in a system striving to guarantee basic social rights, racial and gender equality and equitable distribution of wealth, this book is a major contribution to legal theory and invites re-examination of the appropriate balance between social justice and individual autonomy as perceived by the dominant legal culture.