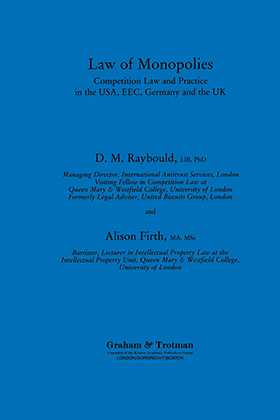 Qty.
Add to Cart
* For general delivery times, please see our Shipping Policy
Share
Overview
The main object of this major work is to analyse the laws of monopolies and mergers in the United States , the European Community, Germany and the United Kingdom. It is not, however, possible to explain the rules on monopolies and mergers outside the context of the rules on restrictive arrangements (restraints of trade); many of the concepts under which the activities of a dominant firm may be treated as monopolistic derive directly from the categories of prohibited conduct under the cartel provisions. The work is essentially a country by country analysis of the anti-trust rules of the four jurisdictions mentioned. Accordingly the Sherman Act, the Clayton Act, Articles 85 and 86 of the Treaty of Rome, the German Law Against Restraints of Competition, the UK Fair Trading Act, Restrictive Trade Practices Act and Competition Act are all examined in detail. Where appropriate, subsidiary legislation also, in particular the various regulations issued by the European Council and the European Commission, are dealt with.
Table of Contents