Loading...
Store International Law At The Centre: The Institute Of Advanced Legal Studies At 50 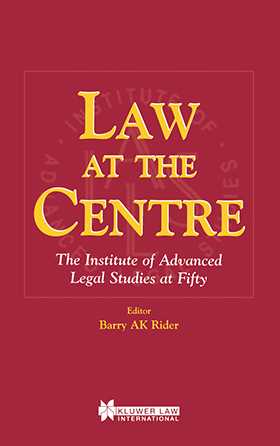 Law At The Centre: The Institute Of Advanced Legal Studies At 50

Qty.
Add to Cart
* For general delivery times, please see our Shipping Policy
Share
Overview
The Institute of Advanced Legal Studies was founded in 1947, although the idea of establishing a national law library and centre for research was conceived over fifty years before this. Since its foundation the IALS has developed a library of international standing and has been able to foster and promote legal research not only in Britain but around the world. It performs a unique role in the United Kingdom and the Commonwealth and an increasingly important one in Europe.

To commemorate the Institute's jubilee and the inauguration of the Society for Advanced Legal Studies, Professor Barry AK Rider, the IALS's present Director, has assembled a series of papers which not only trace the Institute's development into an institution for the advancement of legal research of world-class standing, but also illustrate the depth of support that it enjoys from some of the most distinguished and respected legal scholars of today.

This volume is therefore a testament to the past and an indication of what the next fifty years will bring--with the Institute at the centre of advanced legal research in the United Kingdom.