Loading...
We know your business is rapidly adapting to the global COVID-19 outbreak. If you need assistance with your Wolters Kluwer products or would like to get more information on a complimentary Guest Pass to any of our online products, please contact your representative. To help you stay informed and navigate the changes, Wolters Kluwer is providing free insights and resources. View Resources here Close
Store International Law And Policy Of Regional Integration, The Nafta And Western Hem 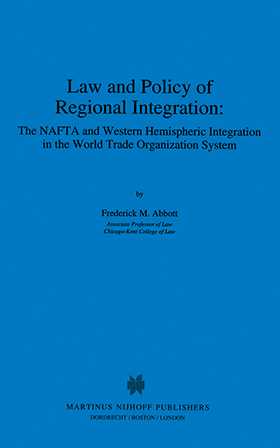 Law And Policy Of Regional Integration, The Nafta And Western Hem

Available: Ships in 3-5 Business Days
Price
$297.00
Qty.
Add to Cart
Share
Overview
The publication of Frederick Abbott's new book could not be more timely. The impact of the NAFTA on the North American marketplace has clearly manifested itself over the past year and the emergence of the World Trade Organization (WTO) as the regulator of global commerce will have a profound influence on the conduct of international trade.

This book provides a comprehensive approach to the study of the NAFTA and its implications for the global trading system. It covers the political and legal process of NAFTA approval as well as the NAFTA's potential economic impact. Detailed analysis is given to the NAFTA rule systems, dispute settlement mechanisms, and environmental implications.

Perhaps most importantly, this book situates the NAFTA into the broader global multilateral trading system now to be embodied in the WTO. It examines the legal rules of the WTO designed to regulate the activities of regional integration arrangements. It considers the potential for conflict between the rules and trade policies of the WTO and those of the NAFTA. This book holds a strong appeal for practitioners and academics interested in international economic law.

This book is the first volume in the new NAFTA LAW AND POLICY series. This series will include high-quality studies of different aspects of NAFTA, including legal analysis and commentary on the Agreement. Among the numerous areas that will be covered in the series are NAFTA topics as diverse as agriculture, dispute settlement, environment, intellectual property rights, investment, and labour.