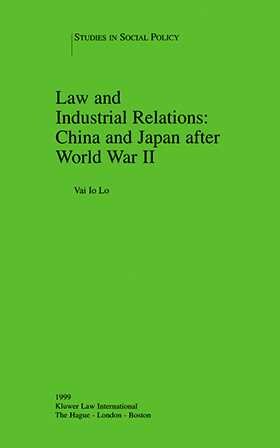 Qty.
This product is available for the standing order program. Learn More
Add to Cart
* For general delivery times, please see our Shipping Policy
Share
Overview
Chinese and Japanese trade unions may seem emasculated and weak when compared with their Western counterparts in that they do not stand up to management to protect the interests of workers. The author's careful analysis probes the reasons for this difference, tearing down stereotypical notions about societies with a Confucian heritage, to examine the significant role of law in shaping industrial relations in modern China and Japan.

Through a comparative analysis of their trade union laws, this work analyses the role of law in shaping postwar industrial relations in China and Japan and the interplay amongst such elements as the State or the Party, management, and workers.

The work focuses on industrial relations in commercial and industrial enterprises, addressing such issues as the performance or nonperformance of trade unions in China and Japan and possible explanations, and the prospects and limitations of using codified laws to effect change or control in the postwar industrial settings of these two countries.

The work's helpful features include a comparative approach, the use of case studies to maximize objectivity and insight, a unified and clearly expressed thesis and conclusions including a summary of findings, footnotes and cross references, an index, and concise explanations of the relevant legal provisions and the manner in which they have been applied.