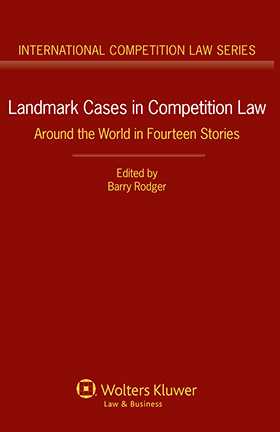 Landmark Cases in Competition Law. Around the World in Fourteen Stories

It is the thesis of this fascinating and highly instructive book on competition law that an examination of one landmark case, scenario, or 'saga' each from a range of legal systems leads to a thorough understanding of the issues informing and arising from competition policy, law, and legal practice. To that end, leading scholars from 14 jurisdictions enhance their academic authority and rigour with an element of panache to describe a particularly salient case in each of their countries, commenting in depth on the contribution of the case to the development of their particular competition law culture and to the case’s enduring significance for competition law and its enforcement from a global perspective.

There are chapters for each of thirteen countries as well as the European Union, preceded by an informative and thoughtful introduction. For each landmark case selected, the legislative background, the case facts, and the legal ruling and reasoning are all minutely described, along with commentary, critique, and assessment of the case’s impact and contemporary significance. The cases cover vast swathes of the competition law territory in terms of substance and procedure, dealing with cartels, abuse of dominance, mergers, and vertical restraints, and involving diverse forms of public and private enforcement processes.

Aspects covered include the following:

More than a set of landmark case descriptions, this book, in which many chapters reflect upon recent and consider further future significant reforms, demonstrates that competition law and its enforcement processes form part of a chronological narrative, and that it is important to understand the broader legal, social, and economic context within which competition law and policy develop.