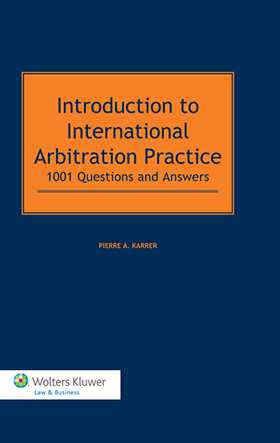 This unique guide to the practice of international arbitration is an enjoyable and essential read. Anticipating just about every question likely to arise in an arbitration (and some less likely ones too), Pierre Karrer shares his practical insight from his career as a leading arbitrator.

Presented in a question and answer format, Introduction to International Arbitration Practice, 1001 Questions and Answers, contains useful examples and real life anecdotes. The Appendix contains 22 of the author’s own templates and checklists, including a comprehensive Procedural Order No.1 and Procedural Timetable, ensuring that this will be a frequently used and practical guide for anyone involved in international arbitration.

Addressing all areas, including chapters on the history and philosophy of international arbitration, Pierre Karrer offers valuable insight into the following: ;

Chapter 3 Setting Up the Arbitral Tribunal.

Chapter 4 Initial Steps in an Arbitration.

Chapter 8 Judicial Remedies at the Seat.

ANNEXES: ANNEX (A) Our Arbitration Team, and Theirs, Internal Party Worksheet.

ANNEX (B) First Letter from Co-arbitrators to Parties on Appointment of Presiding Arbitrator.

ANNEX (C) Letter from Co-arbitrators to Parties after Having Found a Presiding Arbitrator Candidate.

ANNEX (D) First Letter of the Presiding Arbitrator Candidate to the Co-arbitrators.

ANNEX (E) Letter of the Presiding Arbitrator to Co-arbitrators Re the Draft “Three Documents”.

ANNEX (F) First Letter of the Arbitral Tribunal to the Parties.

ANNEX (K) Cover Letter to Parties for First Draft of Procedural Order No. 1.

ANNEX (R) A Few Tables of Contents of Awards.