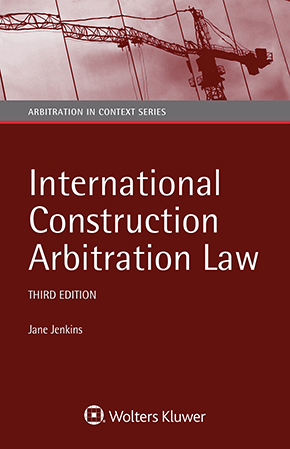 International Construction Arbitration Law, the eminent practical guide in this third edition, is aimed at addressing the significant developments in the practice of dispute resolution on major construction and engineering projects. The text, updated to include the latest edition of arbitral rules and to introduce the Prague Rules, considers the full range of available dispute resolution methods, including mediation, conciliation and determination by dispute review boards, before focusing specifically on arbitration. The third edition addresses fresh thinking on MedArb, guidance on preparation for and conduct of virtual hearings in the wake of COVID-19, technological advances to assist collection and presentation of evidence, litigation funding and includes a new chapter on the role of arbitration in tender disputes.

Recent years have seen the rise of new opportunities, markets, and challenges for construction projects globally. Specific valuable features of this edition include the following:

The third edition has a new chapter addressing the role of arbitration in tender disputes given the importance of tendering in the international construction and engineering industry.

As an easy-to-use resource for both general counsel and the lawyers in private practice, this book has no peers. It has proved to be of particular value to commercial contract negotiators and corporate counsel who may have many years of experience but have not had to live through a construction dispute or manage a construction contract during the life of a project. Lawyers in private practice embarking on a construction dispute for the first time will also find this book of value, as will students of dispute resolution.

Acknowledgements to the Third Edition

CHAPTER 7 Commencement of an Arbitration

CHAPTER 8 Control of the Arbitration

CHAPTER 9 Preparation and Collection of Evidence

CHAPTER 12 The Conduct of the Hearing

CHAPTER 13 Effect of the Award

CHAPTER 15 Tender Disputes and the Role of Arbitration

"This new edition of Jane Jenkin’s established work will be very much welcomed by lawyers, engineers, quantity surveyors, accountants and others who are involved with or interested in the resolution by arbitration of international construction disputes.  It brings the relevant law and practice up to date with, for instance, a new Chapter on the arbitration of disputes arising from tenders. It refers to new practice proposals or guidelines such as those set out in the ICC’s authoritative Construction Arbitration Report of 2019; and it highlights changes in Rules of arbitration which may impact on construction arbitrations, such as the revised Rules published by the LCIA on 1 October 2020.  However it would be wrong to regard this book as being in some way limited to construction disputes.  Its reach goes well beyond this.  Its sound, highly practical recommendations on the presentation of a claim or a defence encompasses such matters as the value of a chronology, the collection of evidence, the electronic management of documents and schedules, and the software and technology that is available to assist such processes. These are not matters that are of interest only to those engaged international construction arbitrations. They are of interest and value to those engaged in international arbitration generally."

Jane Jenkins’ 3rd Edition of International Construction Arbitration Law does what many works on international arbitration do not set out to do, being both a guide to the claims and disputes which typically arise in construction and infrastructure projects and also a guide to the procedural and other aspects of arbitration. It excels as a handbook being logically organised, written in a very accessible style and very comprehensive in its scope. The updates include a new chapter on tender disputes and the role of arbitration and a particularly valuable and topical discussion on the practical realities of virtual hearings. Jane has again produced a textbook which is a must have for its target audience and of real interest to those regularly involved in construction arbitration.

"The ‘Clachan Bridge’ connecting Construction with Arbitration. Like the ‘bridge over the Atlantic’ Jane Jenkins book, International Construction Arbitration Law, elegantly bridges the divide between the complexity of construction and that of arbitration, allowing practitioners steeped in one to be guided across to the key aspects of the other. As a ‘younger’ Quantity Surveyor and Commercial Manager I had a construction project that ended up embroiled in a dispute that ended in an arbitration, Jane’s book provided an essential bridge between my construction knowledge and experience across, what at the time felt like an ocean of unknown, to the island of arbitration; a land with its own language and customs. Now in its 3rd edition, International Arbitration Law, remains a faithful guide in addition to acting as a lens that focuses attention on key aspects of both construction contracts and arbitration practice along with other common ADR approaches adopted across construction. I commend Jane’s book to you and am sure that it will be faithful companion on your journey."

Derek Nelson, Partner, HKA, Chairman of The Academy of Experts

“This 3rd Edition of International Construction Arbitration Law is sure to be the leading reference on the subject for the new decade just as the previous editions have dominated the 2010’s. Readers can expect to find valuable theoretical and practical insights on the major issues involving the management and resolution of construction disputes, which make the publication a must-have in the library of any lawyer and arbitrator acting in the field. Specifically, I am certain that, by digesting and deeply reflecting on the recent efforts of several institutions, including reports and changes to the rules of the main arbitral institutions, this new edition will be a tool for tackling one of the biggest issues on construction disputes to date: efficient management of arbitral proceedings. “